As I write each post on my time in Chile it dawns on me that I can’t prioritise the beauty of each location over another, the diversity that Chile’s four thousand plus length, is unparalleled and the natural beauty of the country is a testament to that and thus its continuously changing forms of nature. If I had to put my head of the line and rate them, it would be Torres Del Paine at the top, followed by San Pedro de Atacama with the rest inseparable simply because some aspects of each should not be missed whether Valle Elqui, Puerto Varas, Chiloe or Valparaiso. The history of Chile from Tierra Del Fuego to Arica is intense with the need of having to fight for its land in the north and south, while its politics centred around Santiago and its poetry came largely from Neruda’s houses at Isla Negra and Valparaiso and Gabriela Mistral from Vicuna close to the Elqui valley.

The days I spent in Torres Del Paine was the last few that I had in Chile and it was here that I saw the crown jewel of the country, the crown jewel of Patagonia and the spectacular diversity that is Torres Del Paine. If you are planning a trip to Chile this is a must do, there is no question about it. At Torres Del Paine they say you experience four seasons in a day, I can testify to that. Never have I experienced heat and sweat, rain, snow, avalanches and cold, temperatures swinging from 26’C to -5’C in less than 12 hours except in Torres Del Paine, which itself seems to be a borrowed land from a far away planet. I decided to trek the W, starting from the dusty road at the entrance of the park on the east and somehow it just felt correct, going the other way would mean taking the catamaran before you start trekking and to me it is so much more beautiful to return with the catamaran enjoying the landscape while feeling each ounce of satisfaction in your tired legs, the sites you saw and the expanse of the park as you smile and all that you saw pass you by, it brings in that touch of nostalgia and another opportunity to bid farewell to all the beautiful parts of the trek that will live on in your memory. Starting from the west at Glacier Grey to the east and walking out of the park is so much more incomplete, Especially when one considers that the magic of glacier grey is left for the end. 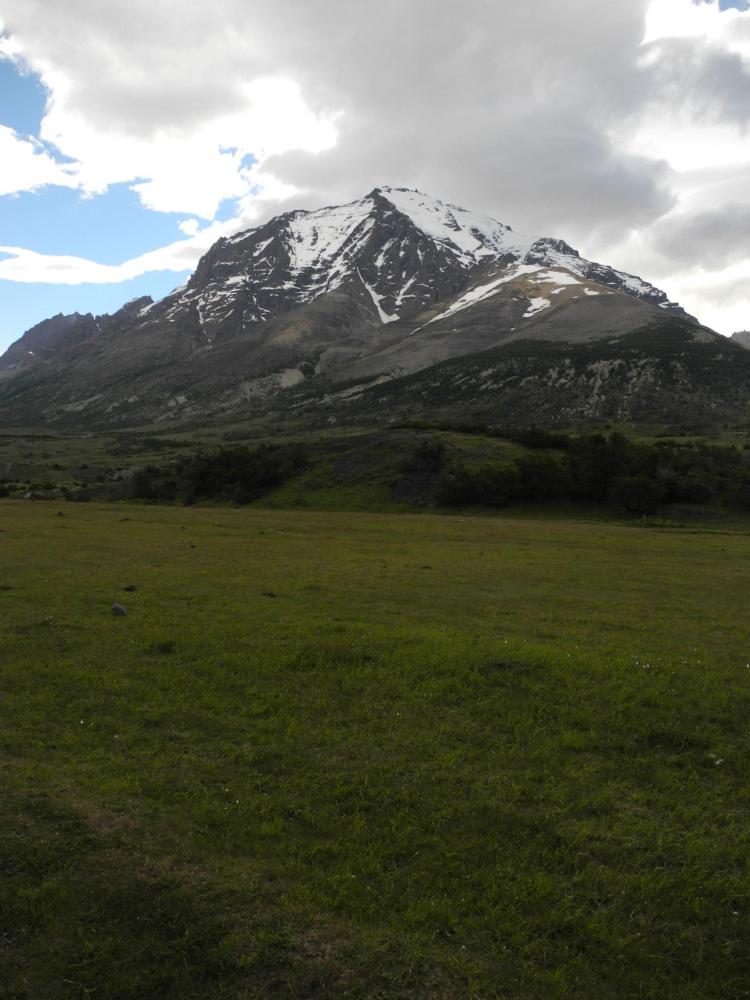 The start near the Hotel Los Torres

I flew into Punta Arenas from Santiago via Puerto Montt at 3 in the morning and it made no sense to sleep at a hostel that night. I walked through Punta Arenas in the early morning light enjoying the breath of fresh air and reached the bus station well in time to book a ticket for the first bus to Puerto Natales. At the bus station, I met a Colombian and two Mexicans who had also decided to take that very bus in order to Trek the W. We got to Puerto Natales by ten in the morning, bought some food from the Unimarc supermarket there and headed to Torres Del Paine soon after. We reached the entrance at around 3 in the afternoon and paid the 20,000 pesos entrance fee, registered ourselves and took the bus to the Hotel Las Torres. From there we walked up to Refugio Chileno and decided to spend the night there. It was a rather small campsite but with the sound of water flowing below. It cost 6500 pesos for the night and we got one of the last places at the back to put up our tent. This was a large tent which I had borrowed from a friend in Santiago, it was a traditional tent where one had to connect the metal sticks, that holds certain importance for later in the trek. That night we slept early since we had a long day ahead.

I was awoken at 5 that morning at by 5 30 we four we on the way to Mirador Torres in time for the sunrise. That day the weather was cold and overcast in the morning so we didn’t get the spectacular view of the three Torres view which is highly spoken of. There was a slight cloud cover at the top, but since we spent over an hour by the lake below the Torres the clouds did lift and we got a full view. It was splendid but as the rain began to come down heavily we decided to return to Refugio Chileno. It took us just under an hour each way going at a rather quick pace without our bags. Back at Refugio Chileno, we ate breakfast picked up our bags and headed towards Italiano. It was 9 in the morning. Campamento Italiano is a free campsite and we thought it would be the best option to sleep at on the second night. This was the longest day doing well over 20kilometres. The descent into the fields was easy and then walking down towards Refugio Cuernos was a joy to behold. The fields were filled with flowers, green grass and little streams flowing down. The expanse of Lago Nordenskjold)) with the little islands in it meant that I lost the other three and last to break and take in the view while eating a little food. A met an interesting German man called Fabian and we walked on to Refugio Cuernos. Our pace at definitely slowed as the park became increasingly beautiful to us and it would have been criminal to go from one campsite to another without actually enjoying the trek and its different topography. At Cuernos we took a break, he took out a couple of beers and we made conversation with a few people who were breaking for the day there. We still had over five kilometres to go. Our backpacks still were over 20 kgs and it was going to take a while. It was so much fun at Cuernos that the thought of staying there the night did cross our minds but we didn’t bite the bullet and carried on starting around 5 pm. There were hills and flats as the light began to fade. We knew we would make it but the luxury of taking more breaks to stop and stare as if entranced was gone. We came out of a thicket and into a cutting, greeted by the sound of fierce water running. We were not too far anymore, just a kilometre and a half. We got to Italiano with the light almost gone, we set up our respective tents, I met with my friends from earlier, ate and slept.

The next day I got up leisurely, I decided I would just go to Paine Grande after going up through Valle Frances to the Mirador Frances and somewhat further but not all the way to Mirador Britanico. I did just that, at my own pace, it was uphill and slightly harder than the previous day. I sat at Mirador Frances writing poetry and stunned by the view for over an hour. The glacier ice fell like little avalanches and to get a 360-degree view of mountains all around was perfect. I walked on further but didn’t find a better view. Back at Italiano, I met Fabian again and we walked to Paine Grande. Soon after leaving Italiano and walking towards Lake Sarmiento we witnessed the cemetery of trees that was the result of a tourist starting a forest fire in 2011. Nature takes its time to recover and it was truly sad to see the devastation that was caused by the fire. Rising into the hills and getting a better view of Lake Sarmiento below turning over the hills and going on towards Lake Pehoe and Paine Grande was special. The wind speed had picked up and it meant that the lake’s water was literally flying for scores of meters over the lake. It painted magical views as it meant that there were small rainbows across the water that lasted for a few seconds. After crossing the hill onto the other side, the mountain of Paine Grande rose above us and we broke again to enjoy the view, there were large red flowers all around. We were well in time and the day was really easy, relaxed and truly beautiful. Paine Grande was my favourite campsite due to the mountains, hills and Lake Pehoe that add a diverse touch to the camping site. Also, the camping site is spread out and that feeling of openness is liberating. It is also the reason for the wind speeds to go past 100 km/hr each year. That day the wind speed was into the eighties and it meant the death of my tent. I had to rent a professional tent from the Refugio. The tents are put me by professionals who live there and to see them build a tent is like seeing art, especially with the wind speed above 80km/hr in the dark, just with a head torch. There is a centre roundhouse at the camp and we spent the night talking and having a drink before sleeping.

The next day we went up to the hills close to the camp and I continued to write poetry. We started the trek to Refugio Grey at 10 am. Speaking about life and philosophy for the first couple of kilometres meant that we moved on at a lethargic pace, there was open land, the sun shining and small hills, easy all along. We then made a conscious decision to walk faster and with that, we reached Mirador grey rather quickly, we didn’t have our backpacks and we could cover ground really fast. As we hiked with a piece of wood as a stick we ran across the terrain and with the wind and openness the feeling was just happiness. At Glacier grey came into sight we both knew we had never seen anything as that, not just had we never seen a glacier but such expanse of ice on the horizon like an empire as mountains rose on the horizon took our break away. We walked on towards Refugio Grey, got a look of the Glacier from above it and started our way back. The last 3 kilometres we ran through and we were there back at the campsite. Fabian left by catamaran that we got back in the nick of time for and I decide to spend another night in the park. It was an experience of a lifetime. Also, there was no chance of getting back to Punta Arenas that day in any case. That night the temperature fell to -5 and it was a cold night.

In the morning, the sky was dark and the Paine Grande was covered with snow. I took the morning catamaran out of the park, refreshed and incredibly happy. Back to Puerto Natales to Punta Arenas where I ate a proper meal with a couple of Chileans, I met at the hostel.

The W was done.

Trekking Torres Del Paine is an experience of a lifetime and if you want in-depth information, this is one of the most well-documented treks. I used just the basic information available to know where you camp and have a rough plan. In hindsight I would say having a professional tent is essential, the trek is not hard and I felt I definitely overpacked. I am definitely delighted to have gone east to west.

Punta Arenas things to do:-